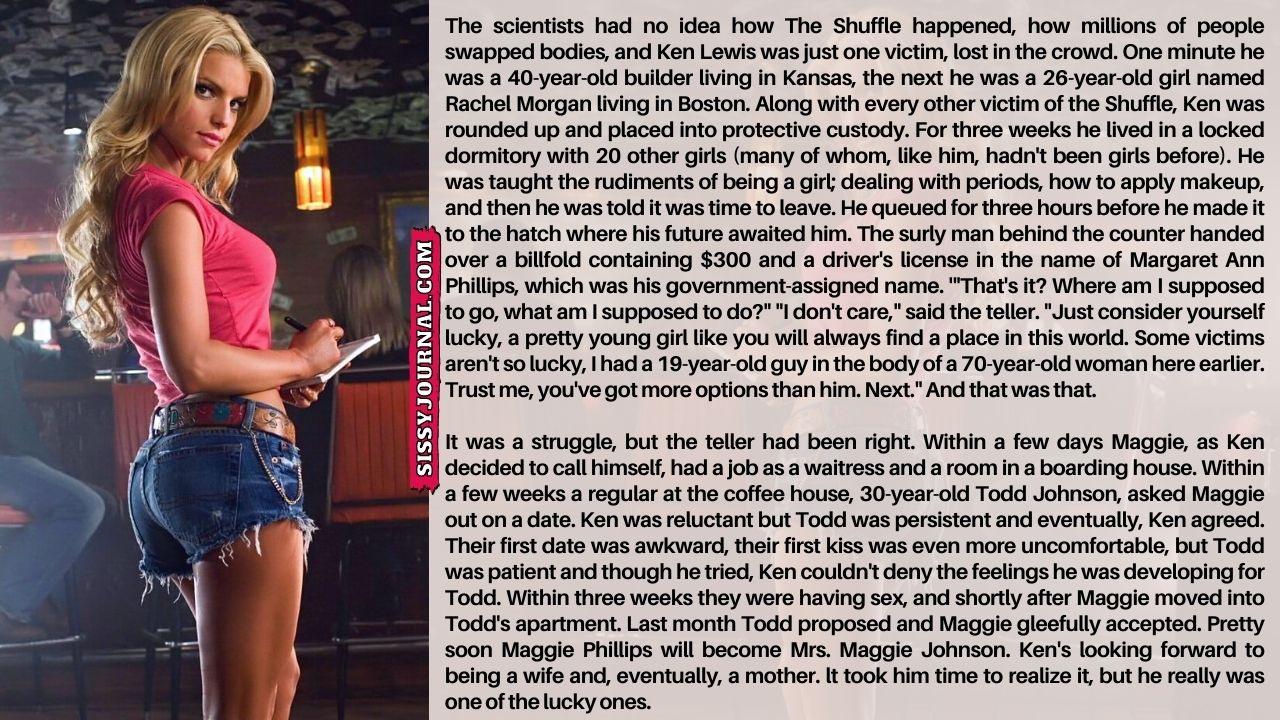 The scientists had no idea how The Shuffle happened, how millions of people swapped bodies, and Ken Lewis was just one victim, lost in the crowd. One minute he was a 40-year-old builder living in Kansas, the next he was a 26-year-old girl named Rachel Morgan living in Boston. Along with every other victim of the Shuffle, Ken was rounded up and placed into protective custody. For three weeks he lived in a locked dormitory with 20 other girls (many of whom, like him, hadn’t been girls before). He was taught the rudiments of being a girl; dealing with periods, how to apply makeup, and then he was told it was time to leave. He queued for three hours before he made it to the hatch where his future awaited him. The surly man behind the counter handed over a billfold containing $300 and a driver’s license in the name of Margaret Ann Phillips, which was his government-assigned name. ‘”That’s it? Where am I supposed to go, what am I supposed to do?” “I don’t care,” said the teller. “Just consider yourself lucky, a pretty young girl like you will always find a place in this world. Some victims aren’t so lucky, I had a 19-year-old guy in the body of a 70-year-old woman here earlier. Trust me, you’ve got more options than him. Next.” And that was that.

It was a struggle, but the teller had been right. Within a few days Maggie, as Ken decided to call himself, had a job as a waitress and a room in a boarding house. Within a few weeks a regular at the coffee house, 30-year-old Todd Johnson, asked Maggie out on a date. Ken was reluctant but Todd was persistent and eventually, Ken agreed. Their first date was awkward, their first kiss was even more uncomfortable, but Todd was patient and though he tried, Ken couldn’t deny the feelings he was developing for Todd. Within three weeks they were having sex, and shortly after Maggie moved into Todd’s apartment. Last month Todd proposed and Maggie gleefully accepted. Pretty soon Maggie Phillips will become Mrs. Maggie Johnson. Ken’s looking forward to being a wife and, eventually, a mother. lt took him time to realize it, but he really was one of the lucky ones. 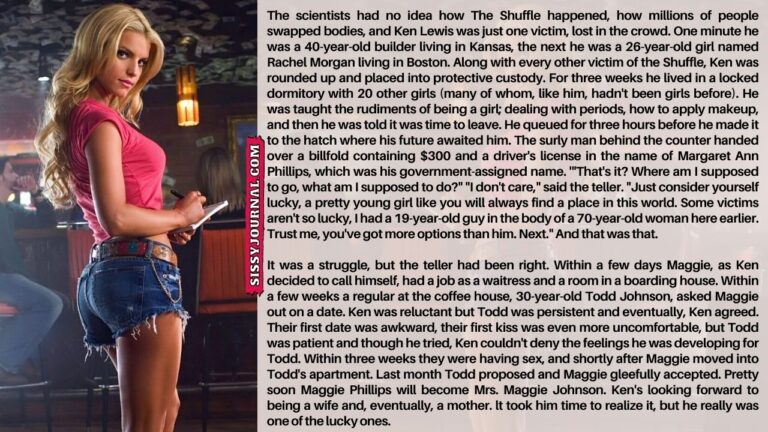 Whatever You Say, Sir!