Hi, technically I’m Tom, although it’s probably easier if you call me Catherine, or Cat, pretty much everyone calls me Cat, hence the outfit and the ears.

I so wanted to join the Kappa Gamma Fraternity when I came to college but I never really expected them to take me, so you can imagine my surprise when they did! Of course, what I thought was part of the pledge process was something else entirely they reserve for the more feminine boys, the sissies who don’t even realize they’re sissies yet. But I was stupid, actually, I still am, a complete bimbo, so I didn’t protest when they made me dress up as a woman, or wear makeup and a wig. I should have thought something was up when I had to make out with several of the older guys but I didn’t. When they demanded blowjobs I knew I’d been had, but by that point, I’d realized I quite liked being Cat, and since I’d enjoyed kissing boys so much I figured I’d probably enjoy using my lips on their cocks just as much. And I did.

There are some guys with really rich families in this Fraternity, so paying for my surgery wasn’t a problem. My pee-pee was pretty small, so I don’t miss it, now I have a nice tight pussy the boys love, and they adore my pert tits too. What will I do after graduation? Well, I’m hoping one of the guys will make an honest woman of me, but if not, well the Fraternity has a program for ‘special’ members, it fixes them up with rich older guys. Of course, I’d like a husband my own age but a girl like me can’t be fussy, right? Do you want to know how I got the name Cat by the way? It’s because of a game the boys invented. They all cum into a bowl and then I have to get down on all fours and lap it all up like a little kitty. I love that game! 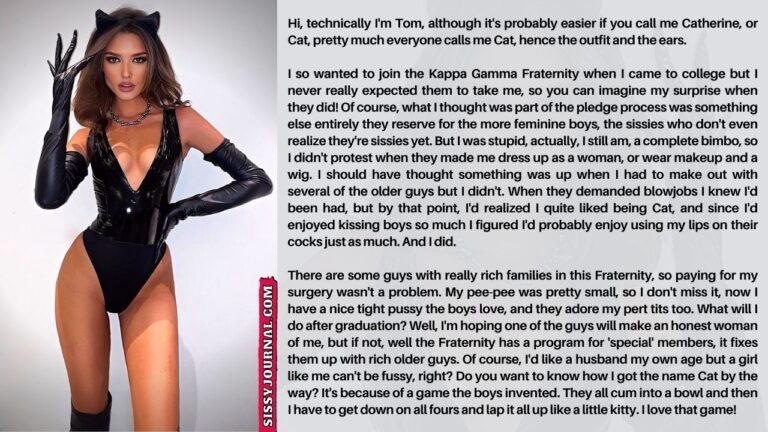 The Curious Case of the Cowboy Bride