When an accident with their father’s newest invention put Mike and his twin sister Alex into each others’ bodies, they reluctantly agreed to pretend to be each other until their dad could repair his machine. Which meant that Mike had to go on his sister’s dates with her boyfriend Luke. This was his third date now and it was the most awkward yet. Of course, Mike didn’t want to talk too much in order to not give himself away. But this time Luke also seemed kinda silent and nervous. In order to somewhat break the silence Mike was about to stand up, “I’m going to the restroom. To… Uhm… powder my nose, I guess.”

“Yeah”, Luke nodded, “When I still thought that you were Alex, I asked your brother’, why you were behaving so differently. And she then told me everything about your swap.” Mike stared at Luke for a moment and then he let out a sigh of relief, “Thank God! Then….can we go home now?”Luke remained where he was, nervously playing with his fingers. Finally, he said, “I…I love you!”

“WHAT?!”, Mike exclaimed loudly. But when he saw that other people in the restaurant were looking at him, he leaned forward and whispered, “Why would you say that? You just told me that you know that it’s me in Alex’s body.”

“I know and… I’ve fallen in love with you”, Luke’s cheeks were bright red with embarrassment, “I mean, I like Alex. A lot. But… it’s different with you. Somehow we’re on the same page. We talk about sports, about video games, about exciting movies. I’ve fallen for you. And if I can read the signs correctly I guess that you’re feeling something for me too. Right?”

Mike sat there, silently looking at his sister’s boyfriend. But on the inside, he was in turmoil. Mostly because it was true what Luke just said. He didn’t know if it was only because of his sister’s body and its hormones, but he had definitely developed feelings for this boy over the past few weeks. Finally, he smiled weakly and said, “I… I guess you’re right. And… a small part of me is even hoping that my father won’t be able to repair his machine. Is that… weird?”

“No, that’s not weird”, Luke smiled and grabbed Mike’s hand, “But let’s not talk about that. Let’s enjoy the time together, however long it will be!” 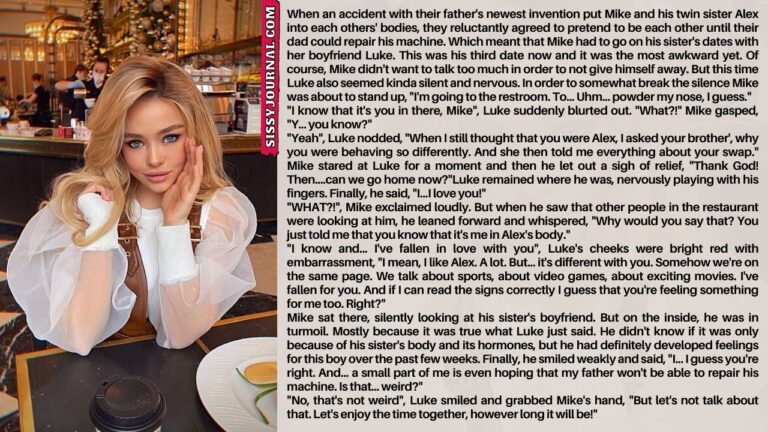