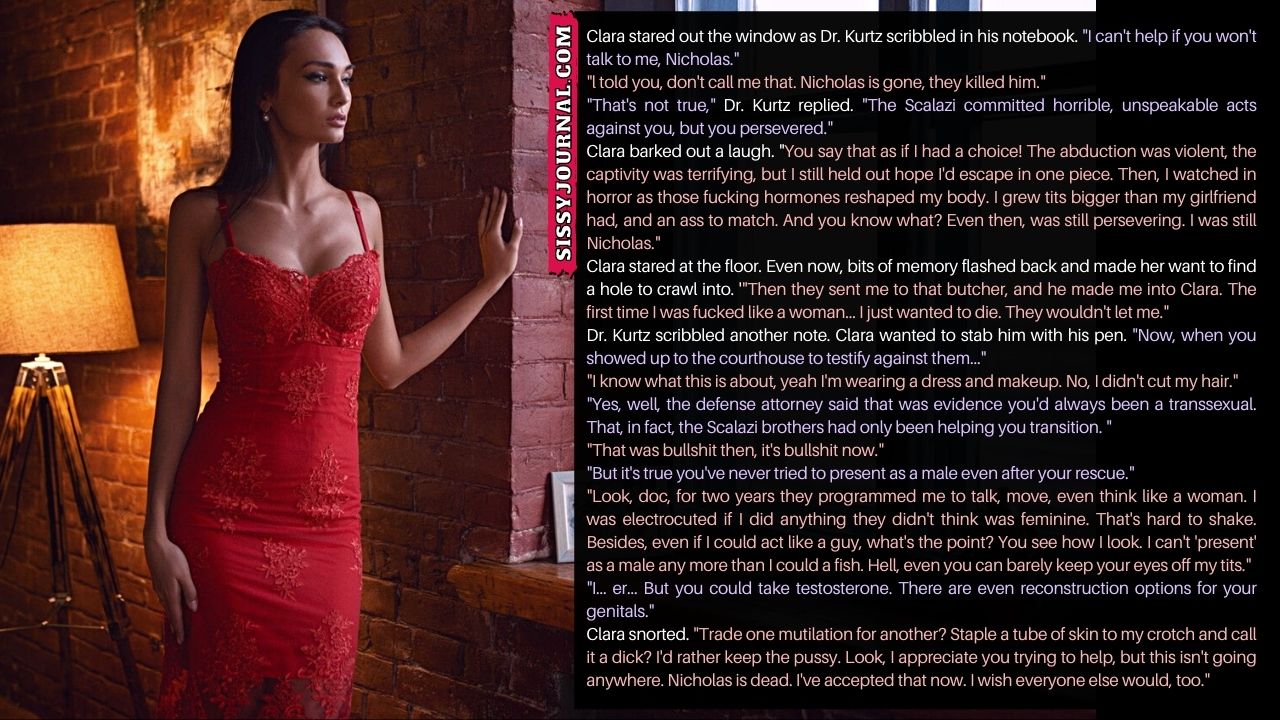 Clara stared out the window as Dr. Kurtz scribbled in his notebook. “I can’t help if you won’t talk to me, Nicholas.”

“l told you, don’t call me that. Nicholas is gone, they killed him.”

“That’s not true,” Dr. Kurtz replied. “The Scalazi committed horrible, unspeakable acts against you, but you persevered.”

Clara barked out a laugh. “You say that as if I had a choice! The abduction was violent, the captivity was terrifying, but I still held out hope I’d escape in one piece. Then, I watched in horror as those fucking hormones reshaped my body. I grew tits bigger than my girlfriend had, and an ass to match. And you know what? Even then, was still persevering. I was still Nicholas.”

Clara stared at the floor. Even now, bits of memory flashed back and made her want to find a hole to crawl into. ‘“Then they sent me to that butcher, and he made me into Clara. The first time I was fucked like a woman… I just wanted to die. They wouldn’t let me.”

Dr. Kurtz scribbled another note. Clara wanted to stab him with his pen. “Now, when you showed up to the courthouse to testify against them…”

“I know what this is about, yeah I’m wearing a dress and makeup. No, I didn’t cut my hair.”

“Yes, well, the defense attorney said that was evidence you’d always been a transsexual. That, in fact, the Scalazi brothers had only been helping you transition. “

“But it’s true you’ve never tried to present as a male even after your rescue.”

“Look, doc, for two years they programmed me to talk, move, even think like a woman. I was electrocuted if I did anything they didn’t think was feminine. That’s hard to shake. Besides, even if I could act like a guy, what’s the point? You see how I look. I can’t ‘present’ as a male any more than I could a fish. Hell, even you can barely keep your eyes off my tits.”

“I… er… But you could take testosterone. There are even reconstruction options for your genitals.”

Clara snorted. “Trade one mutilation for another? Staple a tube of skin to my crotch and call it a dick? I’d rather keep the pussy. Look, I appreciate you trying to help, but this isn’t going anywhere. Nicholas is dead. I’ve accepted that now. I wish everyone else would, too.” 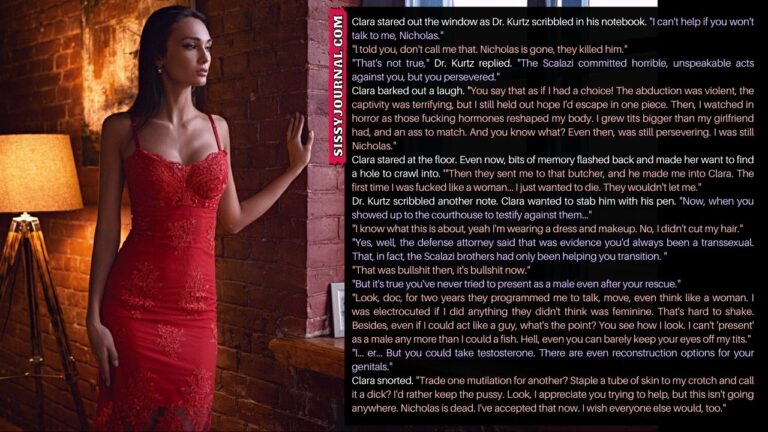