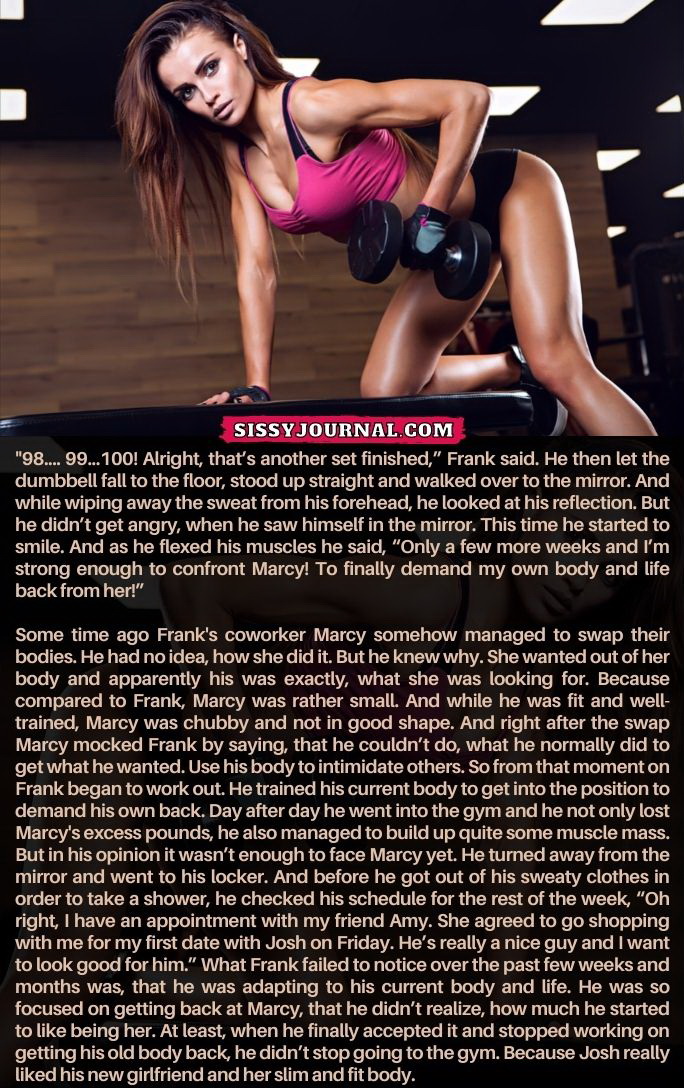 “98…. 99…100! Alright, that’s another set finished,” Frank said. He then let the dumbbell fall to the floor, stood up straight and walked over to the mirror. And while wiping away the sweat from his forehead, he looked at his reflection. But he didn’t get angry, when he saw himself in the mirror. This time he started to smile. And as he flexed his muscles he said, “Only a few more weeks and I’m strong enough to confront Marcy! To finally demand my own body and life back from her!”

Some time ago Frank’s coworker Marcy somehow managed to swap their bodies. He had no idea, how she did it. But he knew why. She wanted out of her body and apparently, his was exactly, what she was looking for. Because compared to Frank, Marcy was rather small. And while he was fit and well-trained, Marcy was chubby and not in good shape. And right after the swap, Marcy mocked Frank by saying, that he couldn’t do, what he normally did to get what he wanted. Use his body to intimidate others. So from that moment on Frank began to work out. He trained his current body to get into the position to demand his own back. Day after day he went into the gym and he not only lost Marcy’s excess pounds, he also managed to build up quite some muscle mass. But in his opinion it wasn’t enough to face Marcy yet. He turned away from the mirror and went to his locker. And before he got out of his sweaty clothes in order to take a shower, he checked his schedule for the rest of the week, “Oh right, I have an appointment with my friend Amy. She agreed to go shopping with me for my first date with Josh on Friday. He’s really a nice guy and I want to look good for him.” What Frank failed to notice over the past few weeks and months was, that he was adapting to his current body and life. He was so focused on getting back at Marcy, that he didn’t realize, how much he started to like being her. At least, when he finally accepted it and stopped working on getting his old body back, he didn’t stop going to the gym. Because Josh really liked his new girlfriend and her slim and fit body.